EDIT - Project Blue has been submitted for judging as of a few moments ago.

Download a demo here, for anybody who wants to check it out. All comments (including criticism) are welcome. This is a collaborative effort between myself and Frankengraphics. We plan on submitting the first level (64 screens w/ boss battle) for the compo. At this point, the game engine is mostly finished - there are a few sound effects, the boss AI+music, a 'you win' screen, and a few minor bugs to finish up. About 20 screens have been designed, so level design is the next point of interest.

The main character's movement is mostly based upon Mario, or upon this document, to be more accurate: http://photobucket.com/gallery/user/jda ... Nw==/?ref=

There are about a dozen enemy types, mostly variations on a simple theme, but several others as well. In addition there are lasers, conveyor belts, trampolines, and pools of toxic waste to contend with: 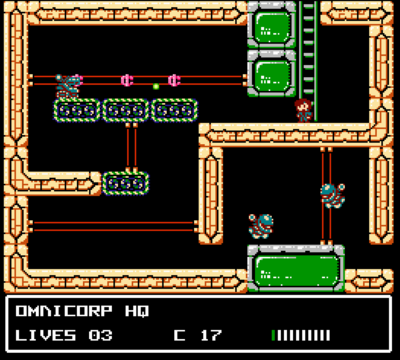 This picture does not do the graphics justice because right now the level design has been purely 'functional' and the black empty spaces will be filled in quite nicely with art.

"Due to system limitations" the final product will be somewhere between the first picture of the functional game and the concept art. There are a limited number of metatiles to work with, etc.

Finally, I've created a LevelEditor which allows you to create entire levels, and creates a ROM with that level. I hope to get a working (simplified) version of this out there with the final ROM so people can make their own levels with ease. 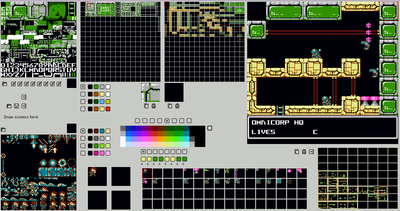 Hey thanks for posting some previews from your project! (That helps being motivated for such a compo)
Title pic and concept art is top! (Nice shadow placement)
Your screenshot looks good too, only these blueish background blocks from the concept art are missing.

Very cool! I love it when sprite palettes use 3 very different colors to break the monotony of single-hue gradients! Everything looks great, I'm definitely keeping an eye on this project!
Top

OMG!
Projects:
Shadow of the Beast (port)
The Sword of Ianna
The Banketh - The Video Game

Dangit FrankenGraphics, you're everywhere. I see some familiar themes, too.

Is it going to be room-by-room or a scroller? Either way it looks pretty ambitious. Looking foward to it!
Top

The N in your font is rather hard to read.

edit: And yeah, this compo will probably be named after Frankengraphics just like the previous was after Mojon Twins.
Top

Is it set in the RoboCop future? Or is this a different Omni Corp?

Thanks for your thoughts! Oh yeah, it's a screen by screen platformer. One situation presented after another.
Just how bad is the letter N? I might change that.


I don't have much else to comment right now (except that it's been a thrill to work on this with toggle switch), so here's a very unscientific guesstimate what the title might look like on an old ntsc crt. 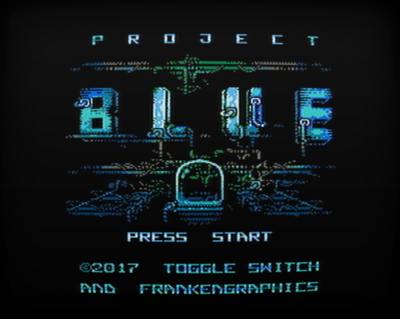 thanks for the comments everyone. this is my first real nintendo project (i've screwed around with putting graphics on the screen before, and making noise before, but this is the first actual project i've made) so it's great to finally start putting it out there after working in the dark for several months!

yeah, the editor took a long time to build, but ultimately i feel like it will save time. a single level (not including objects and other stuff) is 5120 bytes, which i can't really fathom trying to type in order by hand. building screens is actually a lot of fun with a level editor. i can only imagine it would be brutal and painful without one. i was inspired in this goal by whatever program it is that allows you to build new levels for SM3.


Is it going to be room-by-room or a scroller? Either way it looks pretty ambitious. Looking foward to it!

unfortunately it's room to room. i was having trouble visualizing how to hold all the necessary data in RAM to create scrolling, for collisions and all that stuff. once i had put enough work in that there was no going back, i realized how easy it would have been to implement scrolling but it's too late to fix now.

the good news is, i'm using this as a learning step... everything that sucks in this engine will be fixed for my next one (which will hopefully feature those gorgeous graphics that frankengraphics has been posting recently).


Is it set in the RoboCop future? Or is this a different Omni Corp?

i was gonna give you a nerd smackdown for butchering Omni Consumer Product's name, but google tells me you're talking about the 2014 version

no connection, i thought it was a reference to a william gibson novel but now i can't seem to find it.
Top

Here's another quick preview, of the current draft of the theme song that plays during the start screen:

Updated the first post with a demo version of Level 1.

Fair warning - it's long! A total of 64 screens, with two boss fights.
Top

temporary blurb in case anyone needs a reference:

Thanks for playing, guys. Really excited to finally put something out there in this scene.
Top
Post Reply
67 posts