You bought some Magic Jellies. You tried to eat them, just to find out they're as hard as a rock! Match 3 of them or more together to lift the curse, and do large combos to use their magic to lift the curse from several lines of jellies at once!

This is my second NES homebrew game, a submission for NESDev Compo 2018, with music supplied by talented Famitracker user SoundSync5000 and art by a pixel artist from the NES development community, ptoing.

* Two modes of play!
* Two music tracks! (+ a third hidden one!)
* An original puzzle game!
* A sequel to Melo-Jellos, my earlier Pico-8 game!
* Works on any NES emulator, FCEUX, Mesen, even on Nesticle!
* Probably works on a real NES!
* Works on Famiclone systems! 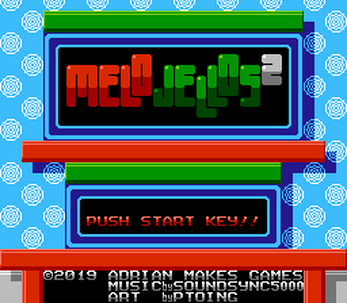 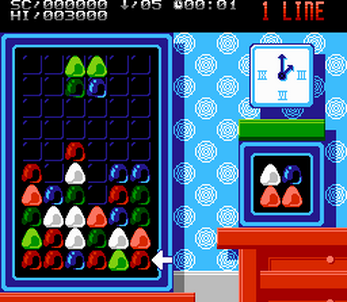 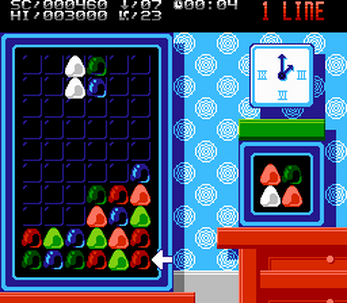 Protip: Use a famous cheat code on the title screen to unlock something fun.

The graphics and music are awesome! I really like track B.

A few things I noticed:
Screen flicker (you already mentioned this)

The controls feel a little weird to me. I keep wanting to hold a direction to make the piece keep moving. Having to smash a direction button to make it move faster feels a bit clunky.

The BG color shows through the jello at the bottom. Once I noticed that I can't unsee it and thats all I can see now.

Selecting the game options before you start can be awkward, once you set an option and go to the next the cursor disappears and leaves nothing to tell you what you selected.

Whats the difference between game modes?

I played using a PowerPak on AVS, so it does work just fine on real hardware.
Top

I love the art style and color choices for this! Can't wait to check it out!

Mog wrote:The controls feel a little weird to me. I keep wanting to hold a direction to make the piece keep moving. Having to smash a direction button to make it move faster feels a bit clunky.

I uploaded a v1.01 that fixes the flickering and addresses mog's complaints about the game. It should play a lot better now.
Top

The game's a lot better with the fixes. The presentation was always nice, but now it's fun to play. Good job!

I'm curious how long a skilled player can stay alive. Is it possible to play indefinitely, or do the jellos pile up faster than one can clear?
Top

It's possible for a skilled player to play indefinitely.
On Level 10+ the jellies fall at a constant rate of 1 tile every 5 frames and never get faster.
My personal best is Level 18 with a score of 024360 points.
Top

By the way, congrats on getting your game working/fixed. I know attribute tables can be difficult.
nesdoug.com -- blog/tutorial on programming for the NES
Top

This was probably mentioned in description.txt, but I decided to add the controls to itch.io and this topic because some let's players and retro game journalists apparently had problems playing my game.

If you have enough sprites left, you might be able to draw this next to the lowest arrow.