With 3 weeks left, I asked myself, what kind of game do I want to play. This was my answer.

This is a card game. Especially popular card game where I grew up. When I visited my grandparents, we played Euchre. Bored at lunch at school? Euchre. My brother held a Euchre tournament at his house. I was a participant.

I hope you enjoy it. 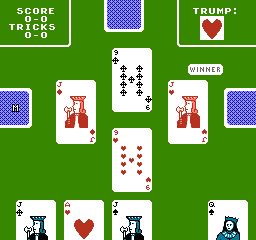 If you're not familiar with the game, please watch a video on the rules,
or visit https://ohioeuchre.com/E_basics.php
nesdoug.com -- blog/tutorial on programming for the NES
Top

Nice! I like that you included the rules (even if you don't play Screw the Dealer)
My games: http://www.bitethechili.com
Top

(even if you don't play Stick the Dealer)

Actually, that WAS how we played, but when I looked up official rules, none of them had that as a rule. Reshuffling is the official rule, and it seems fairer. Everyone has crappy cards? Reshuffle.
nesdoug.com -- blog/tutorial on programming for the NES
Top

I really like the presentation. Now to learn how to play!
Top

I'd love to hear you talk a bit about the ai works, and the process of building that. Someday when you find time.
My games: http://www.bitethechili.com
Top

I could probably release some or all of the source code. It's not as organized as I would like (all logic is in one long file), and it has a large amount of commented out code (I had to rush, and only finished 1 day early). Also has a few inconsistencies that I would have removed if I had much more time (coding things one way for case A and another way for case B)

So, once I can clean things up, I think I will post the code.
nesdoug.com -- blog/tutorial on programming for the NES
Top

Here's Revision C of Euchre, with new music by thecoolestnerdguy. Also, I put in a better random # generator. 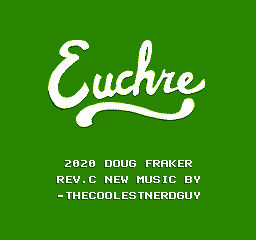 nesdoug.com -- blog/tutorial on programming for the NES
Top
Post Reply
7 posts • Page 1 of 1