The screenshots look great this way. Looks quite good in the example picture.
Top

As with most of my other projects, you'll need to have Python 3 and Pillow (Python Imaging Library) installed, per the standard instructions to set up a build environment for Pin Eight projects.

The input image must be 64x56 pixels, in BMP, PNG, or any other format that Pillow reads. It must follow the engine's limits (grays + 3 colors in each 8x8 pixel area, two distinct groups of 3 colors).

The main() function in a53screenshot.py is hardcoded for testing purposes so that I can test from within IDLE, the editor that comes with Python. You'll need to comment that at the bottom of the file and uncomment plain main().

Now that screenshots can be more colorful, wouldn't this be a good time to improve the graphics of the television set itself? Maybe something like this: 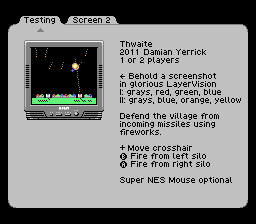 Hardcoded inputs overriding what I passed?

edit: When I comment the hardcode line and uncomment the main() line, it goes further, but the inputs do not match your README, they expect -o instead of two filenames.

edit2: The new image did not use the new palettes for some reason, even though the run was successful:

And the preview did not change any colors either.
Top

Yup. Sometimes I hardcode argv so that I can test from within an environment that doesn't offer a way to specify argv. You caught me with the -o there as well: I changed the API and forgot to change the manual. Thank you for helping to test.


calima wrote:The new image did not use the new palettes for some reason, even though the run was successful:

Try changing parse_palette(s) to parse_palette(args.palette). If that doesn't work, could you attach inherent.png for me to test with?
Pin Eight | Twitter | GitHub | Patreon
Top

Image attached. Please use this one as Inherent's screenshot, it should pass all restrictions (though the colors the tool picked may be bad, there's no purple 03 anywhere, and 18/28 may be closer to the yellows than 17 and 27)

My camera sucks, as do the room lighting and the TV's color temperature settings. But this photo at least shows more colorful screenshots on hardware. 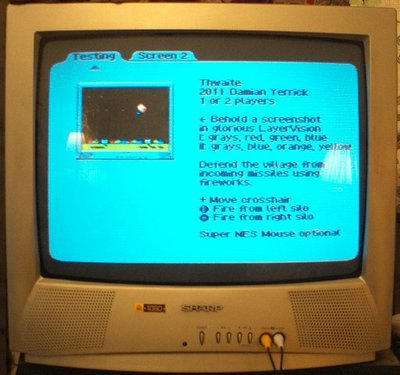 A familiar game with houses and explosions using different palettes

@calima
I meant in the function's use, not its definition.

But anyway, I found a bunch of other dumb typos, and I have attached a revised version with them fixed. Thank you for the test materials.

a53screenshot.zip
A bunch of fixes to the command-line front end
(22.08 KiB) Downloaded 520 times 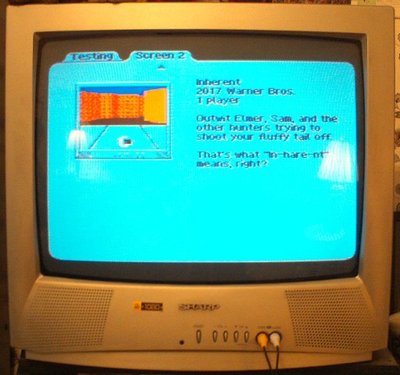 You mean this isn't about long-eared leporids?

As for the purple, the conversion uses a palette generated using Bisqwit's tool. In the revised version of a53screenshot, I've added functionality to savtool.py --write-swatches where .pal writes a 192-byte binary palette for use with an emulator, and .txt writes a 64-line tab-separated file with 6-digit hex codes (e.g. #342800 for color $08).

@tokumaru
That'd certainly be doable with my current framework.
The screenshot frame in the current version of Action 53 was based on a TV belonging to NovaSquirrel, made by Sharp. That was the TV that I had in front of me while making the menu software. Pictures of model 19C140 found through Google Images appear to match it. 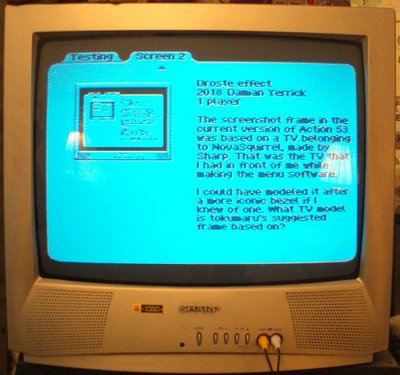 Yo dawg, I put a Sharp TV in your Sharp TV so you can game while you game

I could have modeled it after a more iconic bezel if I knew of one. What TV model is tokumaru's suggested frame based on?
Pin Eight | Twitter | GitHub | Patreon
Top

tepples wrote:I could have modeled it after a more iconic bezel if I knew of one. What TV model is tokumaru's suggested frame based on?

I took bits and pieces from different TVs, but the biggest inspiration was this one (apparently a Sony Trinitron KV-20TR23): 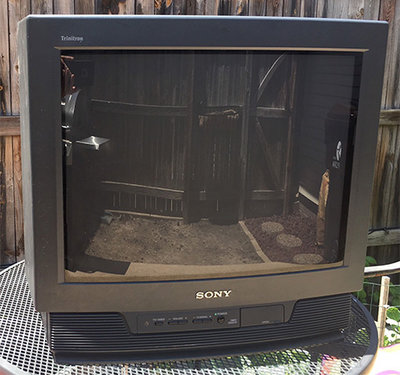 I don't think this is about using an iconic model though, I just think it has to be believable. The current one looks a bit too boxy, and the light color blends with the background too much (the Windows 95 style shading doesn't help here). I figured that a dark/black television would stand out more, and would have better contrast overall.

If you provide a reference image of any other model you think would work better, I can take a shot at pixeling it.
Top

Looking good, and you're credited in CHANGES.txt of the menu source code. 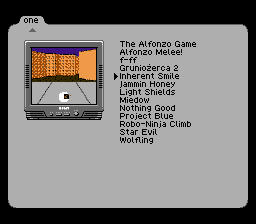 The old bezel looked fine, but the new one has some nice character to it.
Top

In [url=https://forums.nesdev.com/viewtopic.php?p=213846#p213846]the volume 3 topic[/url], infiniteneslives wrote:Only other detail to cover for the rom's release then is special messages on the title screen. Is there a feature to do this as we have in past years with contributor carts and number of LE copies? I guess we'll survive without it, but if the feature is already built in and ready to use, what's the hex offset and limits for the message?

I added a new feature to the builder to let me reserve space in the ROM for notices on the title screen, specifying their position and color. Previously they had been hardcoded in the RODATA of the menu program. The new arrangement should let me build multiple collections from the same menu program even if they have different title screen layouts, particularly volumes 3 and 4.

Now that you've added button icons, how would you feel about one for the d-pad as well? 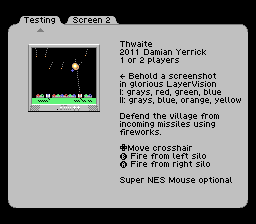 I've uploaded the ROM builder's source code to Microsoft GitHub so that JRoatch can make pull requests in the course of building the master ROM.

Could the design of these overlapping tab tiles be improved? (top: current; bottom: proposed)