Trying to figure out which RGB palette is canonical

It's outdated. I'm just too slow.


Drag wrote: ↑Fri Aug 05, 2022 12:14 pm I think the hue of each color can be expected to be the same from PPU to PPU of the same region (NTSC or PAL), because the color subcarrier is completely digital. It is essentially a clock signal fed through a 12-step shift register, to create 12 phases of the same {color subcarrier frequency}mHz clock. The phase used for the colorburst reference, which determines what hue all the colors will have, is just one of the phases from the shift register all of the rest of the phases come from, so I'd expect that hues from PPU to PPU will be the same.

It turns out that the output video DAC has different output impedance, and thus has a different amount of delay, and thus a different hue angle, as a function of the specific DAC tap that's being driven.

So even though digitally the angles are perfectly uniform divisions every 30 degrees, as the output gets brighter it gets slower and shifts hue.


NewRisingSun told me that as a rule-of-thumb, it's about 5 degrees hue per step brighter (the top 2 bits of the color number) on the 2C02G, and about 2.5 degrees on the 2C02E

This is just one hue across a series - it's way too much data to do by hand.


ugh, one more edit: Capacitors! Not only will older capacitors add more uncorrelated noise, such as so-called "jailbars" and random-seeming noise, but they could add more correlated noise, changing how quickly the output can change - and thus the angles of the colors.
Top

I thought of another thing that can affect the hues; each individual phase from the shift register can be delayed more or less depending on the length of the trace, and the number of gates and other components it passes through before it gets to the output, so that can also add some slight variation to the 30 degrees for each column of the palette, but I'd think the variation would be the same between all PPUs of the same revision.

In the post you linked, you mention that colors 12, 16, and 1A have a slightly offset phases compared to the rest of the hues. The phases for those three colors happens to coincide with what the PPU officially considers to be "blue", "red", and "green" for the purposes of the emphasis function, so I wonder if those specific three phases pass through an extra gate that the other phases don't?

The fact about the DAC is actually new to me; although I've known about the hue shift as the colors get brighter, I didn't actually know why it happens this entire time, and in my previous post, I blamed it on a capacitor.

Quietust just dug into this, and observed that phases $x2/$x6/$xA should be delayed because the same node in the chroma generator has to drive extra long traces for emphasis even when emphasis isn't being used - hence the delay on those colors.

So even though digitally the angles are perfectly uniform divisions every 30 degrees, as the output gets brighter it gets slower and shifts hue.

lidnariq wrote: ↑Fri Aug 05, 2022 4:31 pm phases $x2/$x6/$xA should be delayed because the same node in the chroma generator has to drive extra long traces for emphasis even when emphasis isn't being used

Specifically, it's because the chip is NMOS and those nodes have to be pulled up to +5V via resistors on the die, and those pull-up resistors are the exact same size as the ones for phases #4/#8/#C (which had far less work to do). Only the rising edges of those phases are affected, because the falling edges are triggered by NMOS pulldowns which are extremely fast by comparison.

Looking at a set of PAL PPU images that org posted on Discord a while ago, I predict that the RP2C07 will exhibit a similar problem with phase #2, and possibly phases #4 and #C to a much lesser degree (because it uses the inverse of those phases to trigger red/green emphasis).
Last edited by Quietust on Sat Aug 06, 2022 5:44 am, edited 1 time in total.
Quietust, QMT Productions
P.S. If you don't get this note, let me know and I'll write you another.
Top

Instead of trying to figure out a mostly useless question that has continuously baffled everyone, let's be realistic: what were the televisions that the graphic artists for the games used? I'm going try to drift the topic a bit here.

I'll start for Super Mario Bros. 3. A documentary for the game shows a production tape of unknown origin clearly being seated at a designer desk, with two television sets. On the left is a SONY television displaying what appears to be a Fujitsu workstation of some sorts, showing a primitive editor. On the right is an unknown television hooked up to a real Famicom running a level editor. This is the television we will be focusing on. 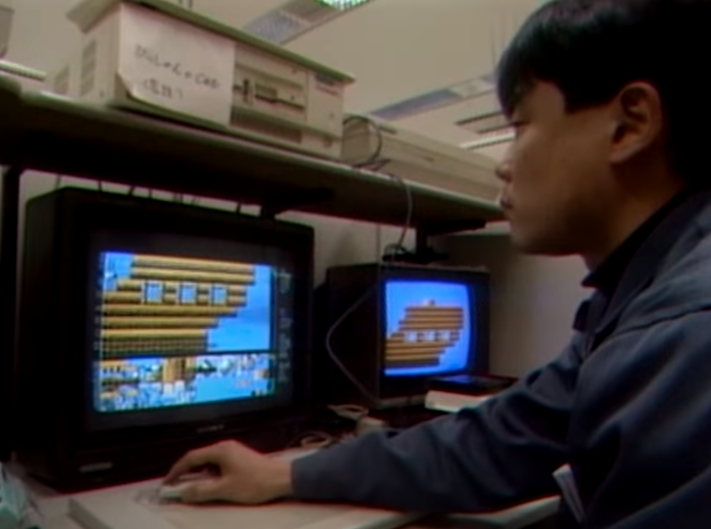 What appears to be shown is an early(?) version of the World 7 airship, using a blue skydrop and World 1 and 5's orange airship palette. Unfortunately, with the television hooked up to the Famicom, we can only make out a few colors. However, what is clear that the mild oranges here have a slight reddish tint and vibrancy, in which the closest thing I found in Mesen was Sony CXA2025AS, -15 contrast, +15 brightness, and some slight desaturation. I wish I knew what the television was.

A different photo, as seen in a magazine, shows a SONY Triniton and what looks to be a different television set from the one the Famicom in the video was hooked up to (the bezels are different)? I can't really tell from much, since the saturation here appears to be so high that it looks like the console was retrofitted with an RGB PPU. 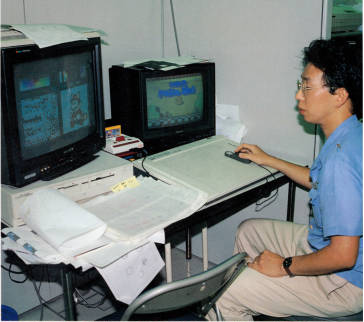 Yeah well at least Balloon Fight had its VS System arcade version being developed at the same time as the home version, and it makes sense if every game was made with the VS System in mind. But why is Metroid the sole exception?

Also, on all pictures of Nintendo developers they use a seemingly normal Famicom and Disk System when they work. Could it had have an RGB PPU installed?

So, I interpret your answer that the output on screen is indeed visibly different (and probably discernible to the human eye) between every PPU version even if we rule out factors regarding the TV and aged electrolytic capacitors.
Top
Post Reply
37 posts