Not a big update, but I finally implemented the current player sprites and blocks into GMStudio (everything before was either GM5.0 or mockups).

Also, see here how I'd like to implement a 4-button mode.
Top

I didn't pay much attention to the graphics when I first saw this thread, but in your demo they look nice. The perspective effect is cool, and the animations are smooth, so good job!
Top

Next step is to reintroduce the laser for my new setup:

Using background tiles for the laser poses a small issue when the laser collides with blocks:

The laser can't overlap, so it has to just stop where it meets a wall. So what I've decided to do was add an animated 'spark' or 'smoke' sprite that also doubles as an indicator whether the laser is doing damage or not:

Now in order to make the laser destroying the bricks convincing, I need to add damage to the brick walls. The brick walls are already taking up 22 tiles. So recreating cracked bricks would take another 22 tiles (and that's assuming I don't intend to make two sets of minor cracked and very badly cracked bricks). Fortunately I had the idea ahead of time to not only draw one set of cracked bricks, but also to draw less cracked bricks compared to their non-cracked counterparts. It's hard to explain what I did, but here's a visual:

The left two columns are for bricks with the left perspective, the two center are for the center, and the right two are for the right perspective. When a brick wall takes enough damage, the top left and bottom right tiles of the 2x2 background appear cracked (the top row). When a brick takes significant damage, all tiles appear cracked (bottom row). Notice the missing space in column two? It's redundant--it's the same as the tiles to the left of it. Also, this entire set is only comprised of 6 unique tiles!

For once, being lazy has its benefits.

Lastly, what happens when the bricks are finally completely destroyed? I opted for the SMB style of brick sprites flying around instead of the Bomberman-esque method of the bricks just obliterating (it seemed more promising). This would add one sprite tile flipped and multiplied four times:

Here it is in action:

As you can see, the sprites had to be a different color, but I think the burnt brown bricks work here.

I didn't like how the bomb explosion looked, so I redid it:

This is supposed to use bg tiles, it switches from the first subpalette (gray) to the second (red), then back to the first:

It never uses more than one at the same time.
Top

That's definitely an improvement! Are you sure this can be done using background tiles? Won't this effect ever have to overlap walls, lasers an other things also using the background?
Top

tokumaru wrote: ↑Sat Dec 03, 2022 10:08 am Won't this effect ever have to overlap walls, lasers an other things also using the background?

I imagine it working like Bomberman, where the explosion is raycasted and just simply stops when it encounters something it can't eliminate. I think it might also be reasonable to assume that lasers wouldn't penetrate the explosion cloud until it's cleared. 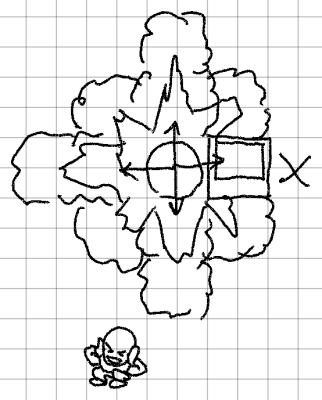