almost two years ago I was a completly layman whit any kind of code... for a little time I try something whit C# in unity and C in the SGDK, but when I discovery that I could do a rom for the Family soo I forget everything and go for it, currently my mind can see some logic in the assembly code (finally...) and now I'm creating assembly code blocks by myself; here do you have a demo. of my first game,have program troubles but well, I do not wanna be a profesional, and is my fisrt game, soo anything is profit; it have more cool things that I program like keys, loked doors, a kind of map game thata am creating anda a some kind of vinil stuff thata will be a amount of musics that I will compose to put in many places of the game but I do not put in the demo.

EDIT: here do we have the first game programmed by me, next mapper here I go! 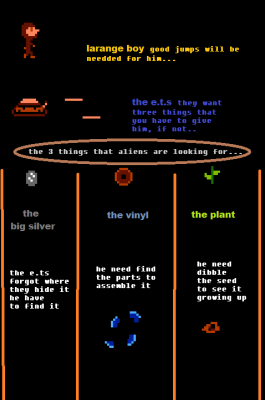 game.nes
This its only the DEMOSTRATION game of 2 months ago, the game its the other archive above...
(40.02 KiB) Downloaded 91 times

Very nice! Having your first game running is always a great feeling. Keep it up and I'd love to see where your game ends up.

Now that you have the basics of NES development down, this is always my next recommendation: Physics for platformers like this can be tricky. If you haven't read it yet, I suggest reading through this article, http://higherorderfun.com/blog/2012/05/ ... atformers/.
My games: http://www.bitethechili.com
Top

I'm here in a memory overflows byte fighting because only a few bytes to put more sfxs in the game, a final screen that are planned need get out too, but the first rustic version of my game is almost finished I think so thata this week will be done!
viewtopic.php?t=24252 <<<<my game
https://mega.nz/file/XapTCCiS#jBcf5oqDG ... M2sgnWv9OA <<BIOHAZARD 8BITS-my"compilingtryingrest" in NM
Top
Post Reply
4 posts • Page 1 of 1