Atmo Sphere is an action-puzzle game where you control a bouncing ball. Stages are cleared by breaking all the non-death blocks and meeting score targets by chaining together blocks of the same color. The blocks advance downward every time you land on the bottom of the playfield, and lives are lost each time blocks crash into the bottom. Lives replenish after completing each stage, but lose them all and it's game over. 30 puzzles in all, available across 3 difficulties.

Scoring: Clearing blocks of the same color builds up a combo, with each adding 1 more point than the previous block. Switching colors restarts the combo's scoring at 1. The current combo value and color are shown in the HUD.

Block types:
Solid: Reflects the ball and contributes to combos. Available in red, blue, green, and yellow.
Arrow: Reflects the ball, contributes to combos, and immediately advances the blocks by 1 row. Available in red, blue, green, and yellow.
Nonsolid: Does not reflect the ball and doesn't change the combo value, but does add the current combo value to the score when hit. Has no color.
Death: Reflects the ball, clears combos, and counts as a death when hit. Unlike other blocks, these move safely off the bottom of the screen.

Continues:
- You can continue the game at the last stage by holding up and A when starting a new game on the title screen. You can even use this to switch to a different difficulty!

Console compatibility: Atmo Sphere automatically detects whether it is running on NTSC, PAL, or Dendy systems. While gameplay is slower on PAL and Dendy systems, audio and video timing have been corrected for each region.


Thanks:
- Thecoolestnerdguy for providing the music and sound effects and for helping me get a sound driver integrated.
- Josh Snyder for helping playtest, providing valuable feedback, and contributing puzzles.
- patcdr and Josh Snyder for throwing together some python tooling to aid in level design. 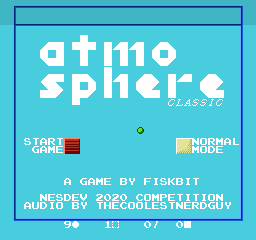 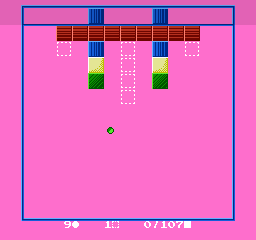