lidnariq wrote: ↑Fri Jul 22, 2022 2:46 pmNothing in the NES bandlimits the chroma one tries to generate, so you can change hue fast enough that the result won't decode as a valid color, especially on TV systems with a lower chroma frequency (NTSC, PAL-N, PAL-M)

The "Chroma crosstalk" activity in my NES and SGB ports of 240p Test Suite exploits this on NTSC TVs. (These are based on my earlier "tvpassfail" demo.) It puts the pixels in the order red-green-blue-red-green-blue, specially arranged to cause the signal to be high or low for most of the dot period. A few letters are drawn in large type with the phases shifted by 1 unit: green-blue-red-green-blue-red. Because the relative phase between the dot clock and the color burst is unpredictable at power up, it then increments all three colors through the rainbow. The user of an NTSC composite display can see the letters slowly fade in and out. 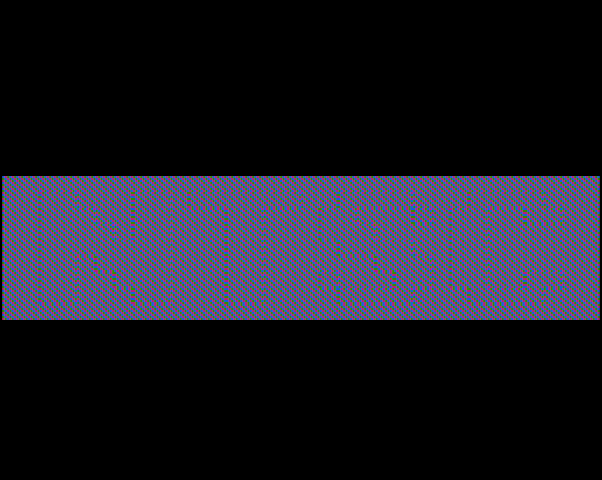 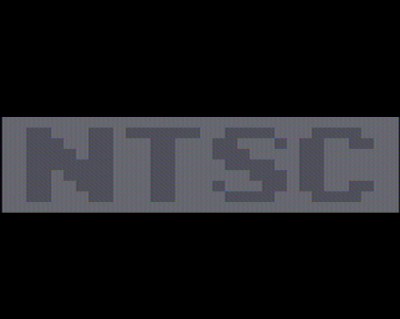 Screenshot in Mesen of "Chroma crosstalk" through an NTSC filter

by cmr
Tepples, that looks quite similar to the chroma subsampling effect on PAL.

Lidnariq, I finally managed to get an NES with the RP2C07A-0 PPU. My theory is that PAL NES's with high serial numbers, probably at least 5 million +, will have it. I found this page where a Spanish NES with serial number PE5178814 has it (https://retroordenadoresorty.blogspot.c ... e-001.html), and I myself managed to get ahold of a non-working Spanish NES with serial number PE5665242 which turned out to also have it. My guess is that they both being Spanish has nothing to do with it, probably all that matters is the serial number. I transplanted the PPU (still haven't figure out why that NES is not working) into a working NES, and could run the demo on it.

I haven't compared colours thoroughly yet, but from an ocular inspection they look roughly the same and the same colors also seem to mix. I'll do more thorough measurements, but for now it seems this effect could be relied upon.

by cmr
Tepples, oh I missed the part where you describe how the letters will fade in and out. That is not something that will happen on PAL, the colors there are stable between frames.

by cmr
Here are captures from the same NES, the only difference being RP2C07-0 vs RP2C07A-0 - easily testable as I socketed the PPU. As you can see there's no perceivable difference in color, the only difference is the 'jitter' in pixels. This might be variation in startup state, as when I retried the test on RP2C07-0, it looked exactly like RP2C07A-0.

With emphasis bits set the colors are also identical.
All times are UTC-07:00
Page 2 of 2